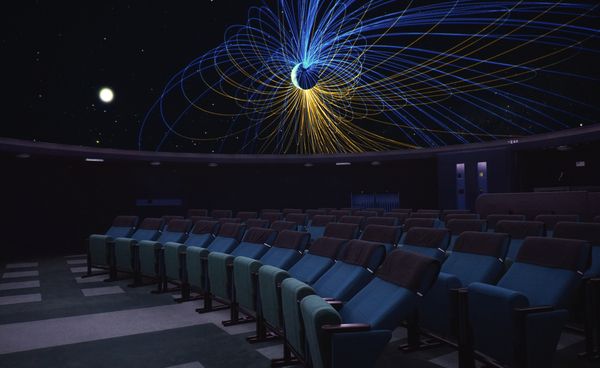 Central part of our building is planetarium/ star hall with capacity of 56 seats and spherical projection area with diameter of 10 m. Until recently it was equipped with optomechanical design device Zeiss Klein Planetarium 2P, produced by German optical group Carl Zeiss Jena.

Currently, the hall is fully digitalised and offers visitors unique approach to celestial sphere and projection of films with astronomical themes through two projectors in fulldome and 4k resolution. Image on projection sphere is composed of more than 10 milions pixels. Planetarium system can simulate view of the sky on any place on the Earth, connecting lines between stars in constellations and their mythology, zooming of selected objects of distant universe, surface details of solar system bodies, etc.. Hall is equipped with special lightening and qualitative audio system for sound reproduction.

Planetarium is not only used for increasing the public interest in astronomy, but also as an educative tool in teaching students. They are taught the orientation on sky, or specificities of moves of celestial object across sky from different locations on Earth’s surface.