Energy contained in solar radiation incident on Earth is practically inexhaufiable from human perspective. The total amount of incident solar energy on Earth is 18.10E16 W. It is approximately 10000 times more than the humans actually consume. Therefore, it is assumed that people‘s attention will be more focused on this source of energy in future (after reduction of stocks or even depletion of non-renewable energy sources). Energy from sun is affordable and cheap and can be used with simpler equipment. There is opportunity to illustrate use of solar radiation by converting it into productive energy or to explore measuring time on our solar terrace.

During daylight, observation of sun is one of the key agendas in our observatory. After learning basic information about our closest star and in case of favourable weather, visitors may observe sun‘s photosphere and chromosphere. Sun terrace is a part of this exploration and our licensed staff is always willing to put the information provided about sun also in practise.

The solar terrace was built in three stages:

In April 2013 it was equipped with samples of simple photovoltaic (energy production from solar radiation) and the conversion of solar energy to heat. It runs the solar fountains, solar oven and a simple fruit dryer.

Secondly, the solar panel was involved in order to heat medium circulating in closed system that to simulate it’s heating in human houses.

The third reconstruction was devoted to measuring the time using sunlight. The solar terrace becomes a "lively solar watch" occupying entire horizontal polar. The equatorial time indicators have been installed, too. 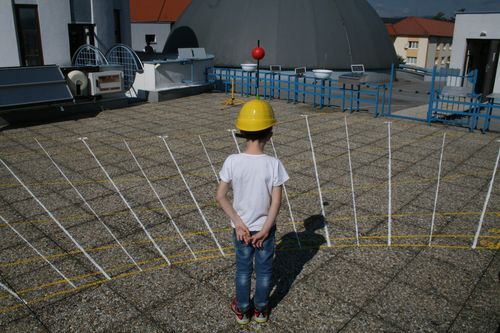 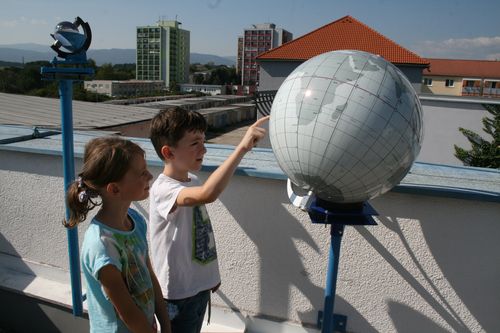 In addition to "live solar watch" you will find:

Sun furnace (cooker) - Thanks to the parabolic surface with reflective layer, the solar energy is concentrated, resulting in increase of temperature. It is used to heat water or to heat food.

Different types of solar watches - The Earth performs two basic movements: rotating around its own axis and circulating around the Sun. First movement results in daily pilgrimage of Sun on sky from east to west. The second one (in contributing of inclination of Earth‘s axis) results in turning a change of its runway in sky during a year. Throughout the year, the solar shadow moves between two curves that determine the summer and winter solstice. Therefore, sundial, can also serve as a calendar. 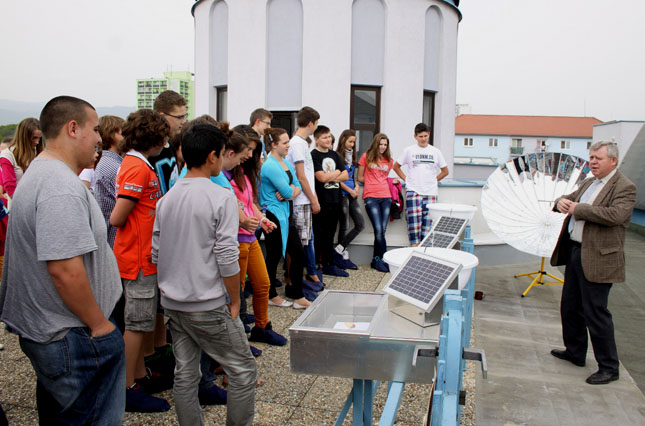 The sundial shows the right local solar time. However, it does not match the evenly flowing civil time. Relationship between the right solar time and the civil time reflects the time equation. The uneven passage of right solar time is responsible for Earth‘s axis slope to ecliptics (23°27‘) and elliptical shape of Earth‘s orbits around sun. Therefore, there is a change of Earth‘s distance from the Sun and also the change of speed at which Earth circulates around the Sun throughout year. It reflects the second Kepler‘s law. The Earth is moving faster in perihelium and slower in afelium.

The largest difference between the right and middle solar time is about 15 minutes. Further deviations between data on sundial and ordinary clock is caused by the difference between local meridian and the meridian, which determines the local time zone–CET is defined for (our)15° eastern longitude.

The most common types of sundials are vertical, horizontal, equatorial and polar.